AFA provides funding for research projects aimed at improving treatment and quality of life for the millions of people living with Alzheimer’s disease.

The following are some of the research projects AFA has supported:

Researchers at NYU Langone Hospital-Long Island are conducting an innovative study called “Platelet-Rich Plasma in the Study of Alzheimer’s Pathophysiology.” The team is studying platelet-rich plasma of individuals with and without Alzheimer’s disease, as well as interactions of the blood with neural progenitor cells. The study focuses on amyloid, an abnormal protein in the brains of people with Alzheimer’s, which some scientists believe to be part of what kills healthy brain cells.  The research has potential in both biomarker development-diagnosing who is at risk early on- and developing drug therapies to treat Alzheimer’s disease.

A study by The Broad Institute of Harvard & MIT and One Mind is examining the role of the brain’s immune cells in the onset and progression of Alzheimer’s disease. Research is showing how, with increasing age and specific genetic influences, microglia (resident immune cells in the brain) respond to amyloid-beta peptides in a particular way that causes inflammation. In turn, researchers hypothesize that this triggers microglia to inappropriately remove synapses in the brain, resulting in dementia. The Broad Institute will leverage new single-cell RNA sequencing tools that allow deep characterization of individual microglia and immune cells. This could lead to new biological insight and inform the identification of biomarkers used for early detection and monitoring of progression and therapies.

Conducted by the Litwin-Zucker Research Center for the Study of Alzheimer’s Disease at the Feinstein Institute for Medical Research in New York, this study is exploring the causes of hallucination, agitation and aggression in relation to Alzheimer’s disease and how they can be better treated.  These types of behaviors are among the most troubling behaviors associated with Alzheimer’s disease and are often one of the main causes that lead to families moving their loved one living with the disease from their homes to a residential healthcare setting.

AFA also awarded grant funding for Hadassah to purchase a semi-automated Quanterix system to use at the new Hadassah Center for Healthy Brain Aging. The system will be used to screen the aging population in order to identify “at risk” patients and assemble a clinical cohort, with the ultimate goal of improving early detection at the pre-symptomatic phase and developing personalized treatment plans.

The amyloid precursor protein (APP) gene family is essential for viability in mammals, but its function is unclear. Mutations in the genes for APP and in the enzymes that interact with APP have been found in familial Alzheimer’s disease (a form of Alzheimer’s disease which is linked to genes and affects at least two generations of a family), suggesting that disruption of APP can lead to Alzheimer’s disease. Researchers at the City College of New York (CCNY) are aiming to identify the role that APP plays in brain health and Alzheimer’s disease using the C. elegans model system. This research can then be translated into discoveries in mammals that could potentially lead to the development of new medications to treat Alzheimer’s that do not interfere with APP function.

Researchers at Stony Brook University are undertaking innovative research project that utilizes Positron Emission Technology (PET) imaging in an effort to further drug development. The most commonly used drugs to improve memory in neurodegenerative diseases such as Alzheimer’s target a set of neurons critical for memory called cholinergic neurons. Loss of cholinergic function is a hallmark of cognitive decline. But these medications, which target the cholinergic system and are known as cholinesterase inhibitors, have only a modest effect.  By gaining a better understanding of exactly how these neurons are damaged by Alzheimer’s, Stony Brook’s research team hopes to improve therapeutic strategies that can more effectively target and treat the damage and return these neurons to a normal state to help improve memory.

Read more about some of these and other AFA-funded research projects by clicking below (links to a pdf). 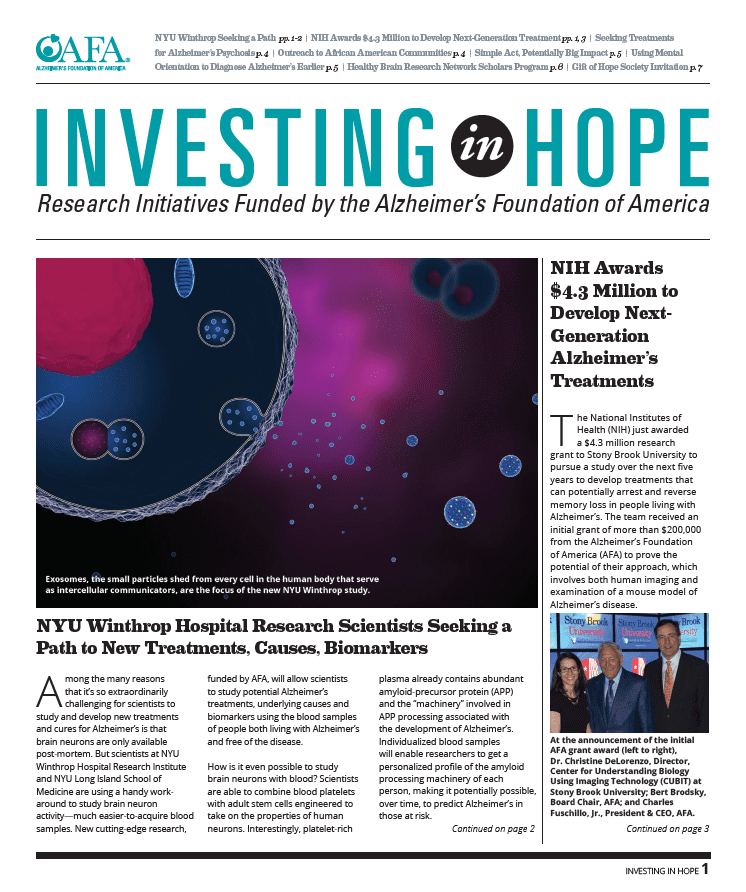