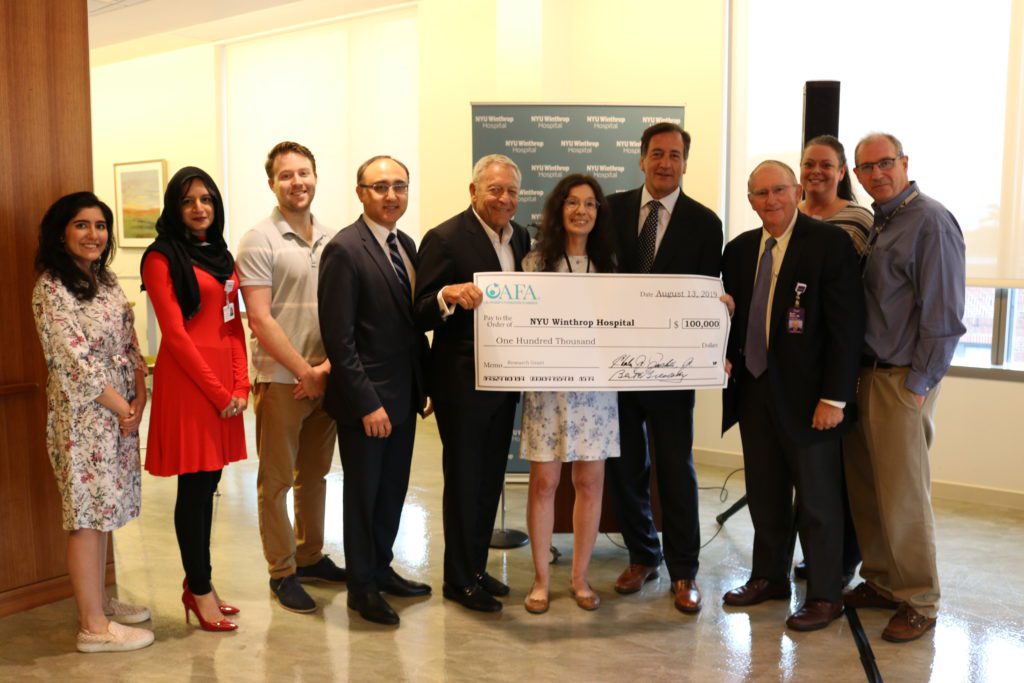 (August 13, 2019) – The Alzheimer’s Foundation of America (AFA) today announced a $100,000 grant to NYU Winthrop Hospital for a research project aimed at uncovering the underlying causes of Alzheimer’s disease and developing new treatments.

The cutting-edge research will reengineer human cells, collected through a single voluntary blood test, to behave like brain neurons, allowing researchers to achieve what they believe is the closest approximation to brain behavior possible.  The brain is the body’s most inaccessible and complex organ, and brain tissue is only accessible post-mortem, making it extraordinarily challenging for scientists to develop new treatments and cures.

Dr. Reiss and her team will gather blood samples from individuals living with Alzheimer’s and those without the disease, and reengineer the collected cells to behave like brain neurons.  The research will isolate and examine “exosomes,” i.e. small particles shed from every cell, including neurons in the brain. These extracellular pieces of neuron, or vesicles, carry genetic information regarding brain neurons and can be extracted from blood.  Researchers will investigate differences in this genetic information between healthy individuals and those with Alzheimer’s and, since these reflect differences in actual brain neurons, plan to use the information gained to reprogram Alzheimer’s neurons to behave more like those in healthy people.

“Alzheimer’s disease is a growing public health epidemic.  With the number of Americans living with Alzheimer’s disease expected to nearly triple by 2060, the need for a disease-modifying treatment is critical,” said AFA President and CEO Charles J. Fuschillo, Jr.  “NYU Winthrop Hospital’s cutting-edge research project has great potential to increase understanding of the causes of Alzheimer’s and lead to a treatment that millions of families are hoping for every single day.”

“AFA is pleased to provide grant funding for this exciting new research project,” said AFA Founder and Chairman Bert E. Brodsky.  “Having cared for a loved one with Alzheimer’s, I know how hard this disease is on families and how desperately new treatments are needed.  We’re hopeful that NYU Winthrop’s research can make a game-changing scientific breakthrough that will improve the lives of families affected by this terrible disease.”

“NYU Winthrop’s non-invasive exosome approach may prove to be one of the best methods for evaluating the human system in order to advance Alzheimer’s research,” said Dr. Allison Reiss, head of the Inflammation Section at NYU Winthrop Hospital’s Research Institute and associate professor in the NYU Long Island School of Medicine. “Examining these particles from brain neurons is like conducting detective work, since they provide clues as to what is actually occurring in the brain itself.”

According to NYU Winthrop, this innovative approach has evolved out of research that Dr. Reiss’ team has been conducting for the last five years, much of it funded by a previous AFA grant. Dr. Reiss noted that in the last two decades, only a handful of medicines were approved to treat Alzheimer’s, while the vast majority of clinical trials—more than 120—were halted. Trials typically rely on research first conducted on mice or using spinal fluid, and those often fail to replicate the complex neurological activity in the human brain. That contrasts with research to find cures for cancers of the liver, lungs, etc., where it is increasingly common for pieces of tissue to be extracted for biopsies – and for profiling of cancer cells—to come up with optimal treatment regimens.

Areas of expertise of the Reiss-led research team are as follows:

Alzheimer’s disease is the sixth leading cause of death in the United States, and the only one in the top 10 without a cure or disease-modifying treatment.  More than 5 million Americans are currently living with Alzheimer’s disease, including approximately 400,000 in New York State and 50,000 Long Islanders.  According to the Centers for Disease Control and Prevention (CDC), the number of Americans affected by Alzheimer’s is expected to nearly triple by 2060.