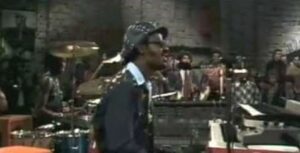 Join AFA for our Facebook Watch Party Concert Series! Watch and listen to your favorite artists from the comfort of your home every Saturday, this August at 2 pm (ET)!

For this virtual concert series, AFA will premiere Stevie Wonder – Concert on German TV show Musikladen (1974). Stevie Wonder is an American singer, songwriter, musician and record producer. A prominent figure in popular music during the second-half of the 20th century, Wonder is one of the most successful songwriters and musicians. A virtual one-man band, his use of synthesizers and further electronic musical instruments during the 1970s reshaped the conventions of R&B. This intimate performance was filmed for the German TV show, Musikladen in 1974 and includes a variety of his most popular songs.