Alzheimer’s Foundation of America Has Awarded $518,391 in Research Grant Funding to Broad Institute and One Mind 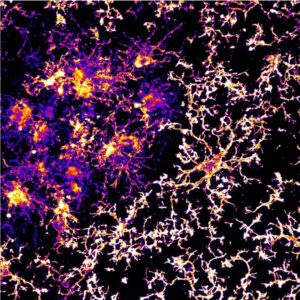 (August 11, 2020)–The Alzheimer’s Foundation of America has awarded $518,391 in research grant funding to the Broad Institute of MIT and Harvard and One Mind, partners on a three-year study to examine the role of the brain’s immune cells in the onset and progression of Alzheimer’s disease. Scientists believe that gaining a better understanding of immune cells and inflammatory processes in the brain could be key to understanding Alzheimer’s mechanisms. Despite decades of Alzheimer’s research, clinical failures have persisted particularly in the context of a focus on amyloid plaques, abnormal levels of a naturally occurring protein that clump together and destroy connections between neurons.

Studies conducted at the Broad Institute and elsewhere have identified a new insight: The onset and progression of the disease appears to be driven by the brain’s resident immune cells, the microglia. Research is showing how, with increasing age and specific genetic influences, microglia respond to amyloid-beta peptides in a particular way that causes inflammation. In turn, researchers hypothesize that this triggers microglia to inappropriately remove synapses in the brain. The excessive loss of synapses results in dementia.

“We already know that amyloid beta peptides deposited in amyloid plaques play an important role in Alzheimer’s disease,” said Beth Stevens, PhD, an Institute Member at the Broad Institute, an Associate Professor at Harvard Medical School, a Research Associate in Neurology at Boston Children’s Hospital, and a leading scientist in this new understanding of Alzheimer’s. “Emerging genetic evidence from the common later-onset form of Alzheimer’s disease points to failures in how the microglia handle and remove these toxic amyloid peptides. These findings suggest that therapeutic interventions targeting microglia and other immune cells could be a way to combat Alzheimer’s, but this research is still in its infancy.”

“We are excited by this team’s innovative approach to Alzheimer’s disease,” said Charles J. Fuschillo, Jr., AFA President and CEO. “We understand there is much work to be done in the area of immunity and inflammatory processes of the brain and inspired by Dr. Beth Stevens and her team’s game plan that could lead to identifying biomarkers for early detection and guide treatment. Lack of progress for a cure demands new strategies to understand this devastating disease. It’s a major growing threat to families worldwide.”

“The breakthrough discovery Dr. Stevens made of the connection between microglia and brain illness, including Alzheimer’s and schizophrenia, is critical to the development of new approaches to prevention and early detection,” said Brandon Staglin, One Mind President. “As an organization dedicated to brain health, we are excited about the innovation and potential of the research being done by Dr. Stevens and her lab at the Broad Institute and are grateful to the Alzheimer’s Foundation of America for providing this critical support.”

The Broad Institute will leverage new single-cell RNA sequencing tools that allow deep characterization of individual microglia and immune cells. This could lead to new biological insight and inform the identification of biomarkers used for early detection and monitoring of progression and therapies.

The key partner on this study is One Mind, a lived-experience-led brain health nonprofit, which is accelerating discoveries by funding and convening scientists in collaborative research for breakthroughs that patients can use.

About the Broad Institute of MIT and Harvard

The Broad Institute of MIT and Harvard was launched in 2004 to empower this generation of creative scientists to transform medicine. The Broad Institute seeks to describe the molecular components of life and their connections; discover the molecular basis of major human diseases; develop effective new approaches to diagnostics and therapeutics; and disseminate discoveries, tools, methods, and data openly to the entire scientific community. For further information, go to  http://www.broadinstitute.org.

Launched in 1995 by Shari and Garen Staglin as their means to “run toward the problem” of their son’s schizophrenia diagnosis, One Mind is today a leading international mental health nonprofit that heals lives through brain research, working from science to patients to society. By convening the brightest minds in brain science and advocacy around a collective vision of “Healthy Brains for All,” One Mind is advancing a three-pronged program strategy of accelerating discoveries, improving services and transforming societal culture. Through such achievements as enrolling over 10,000 patients in innovative clinical studies and the One Mind at Work initiative that has brought supportive workplace mental health practices to over 5.5 million employees, One Mind is creating a world where all facing brain health challenges can build healthy, productive lives. Brandon Staglin, whose own experiences triggered the creation of the nonprofit, now serves as its President, exemplifying the change One Mind seeks in its disruptive research and workplace initiatives.

About Alzheimer’s Foundation of America (AFA)

The Alzheimer’s Foundation of America is a nonprofit organization whose mission is to provide support, services and education to individuals, families and caregivers affected by Alzheimer’s disease and related dementias nationwide, and fund research for better treatment and a cure. Its services include a National Toll-Free Helpline (866-232-8484) staffed by licensed social workers, the National Memory Screening Program, educational conferences and materials, and “AFA Partners in Care” dementia care training for healthcare professionals. For more information about AFA, call 866-232-8484, visit www.alzfdn.org, follow us on , Facebook, Twitter, Instagram and LinkedIn. AFA has earned Charity Navigator’s top 4-star rating for six consecutive years.